Mathew here again, and this is the Bottle Cutter Club Blog by Home Pro Shop.
We’re going to use the Home Pro Shop Bottle Cutter, and we’re going to make drinking glasses out of old beer bottles, so it’s kind of cool. You know, you’re recycling and, not just that, you get a little fancy cup that well, you probably would buy at the store. So, you can have it for free.
Safety first.  Got my gloves, safety gloves. Got my bottle cutter right here, and right now, I have hot water boiling and I also have cold water in the freezer, and that’s so for the ending, we can have the score actually separate the glass. So we’re going to get our bottle and I just cleaned these bottles out.
So let’s measure it.  You want these cuts to be basically the same size so I’ll show you guys how to get that down too.  You want to measure the bottle by moving the backstop. And, it looks like I’m going to go a little bit above the label because I want the full label. Once you get the measurement in you want to tighten your knot. And get that tight in so it doesn’t move anymore. So just make sure it’s sitting comfortably against the base of the bottle cutter, and like I said before on our last blog post, what you’re going to do is you’re really going to just do one score all the way around one revolution turn on your bottle. If you do more than that, you’re really just wasting time and you’re actually going to ruin the cut, it won’t separate correctly. 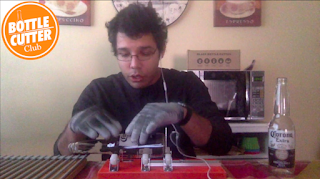 So let’s begin. You’re going to put a little bit of pressure on the glass bottle, not really much. You’re not going to be pushing very hard on the glass, if you do that the bottle might even shatter on you.  So let’s just do a very tiny bit of pressure and we will turn this bad boy. And you want to turn it back towards you.
And there you go.  And you actually feel it notch in there when it’s done being cut. So there’s one beer bootle. And let’s do the second one. And you want to line it up the same way, and you want to look and as you can see since this is tight you can just have it, basically just a little bit back on that base and it’ll be, the same size. Apply the same, a  little bit of pressure, and down. 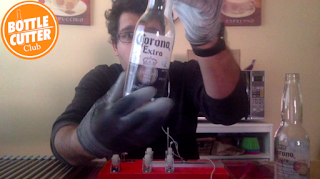 There you go.  As I said, you’ll feel it when it actually, hits into that notch where you started cutting.  And there we go. We got our two bottles scored and, if you can see that there there’s a line all the way around, a nice even line. Same with bottle number one. Nice even line all the way there if you can see that. And, I’m going to get my hot water and my cold water and we’ll have these bottles separate.
Alright so I got my hot water right here, boiling hot water, and I got my ice-cold water here. So you want to get one of the bottles you scored, either one works or if you just have one, then one. And you want to dip it into the hot water first, for a few seconds, and then you want to transfer it over to the ice-cold water.  And you might have to do this more than once. Sometimes it works with just one shot and that’s great. And just make sure the whole score is in the water.
When you do it right, if the score is done correctly and the hot water is hot enough and the cold water is cold enough, it will separate the glass all by itself. And like I said you might have to do it more than once. 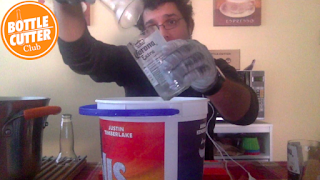 The first bottle separated. And let’s do the next one. There we go. Let’s do this one and get the score in there and you might want to turn it a little bit, so the uh, the entire score is in there.
This one’s separated too. 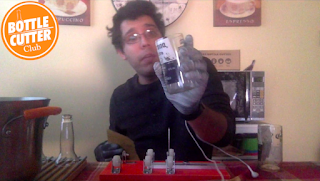 Alright. We’ll get our sandpaper from the glass bottle cutter kit. You want to sand it all down I’m actually going to, rip this sand paper down in half to make it easier to hold. And sand this stuff down, so for example, for the first one that came out real clean, even score, you want to sand all this down.
A little trick that you can do is you can just, hold it down, place the bottle on it and just turn it.
There you go and that looks great. So then you just wash that off and you got yourself a nice little drinking glass. Check that out. Beautiful. 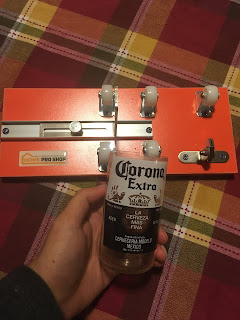 Well, thank you, everybody, for reading this post.You can buy the bottle cutter if you click this link and if you have any questions go and leave comments and don’t forget to subscribe to our youtube channel and join the Bottle Cutter Club Facebook Group for more tutorials.

For all you crafters out there, take care.
Until next time.
Bye. 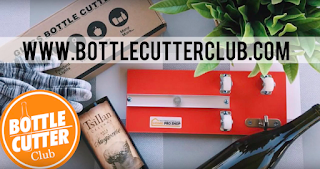 My name is Matthew and this is the Bottle Cutter Club Blog by Home Pro Shop. 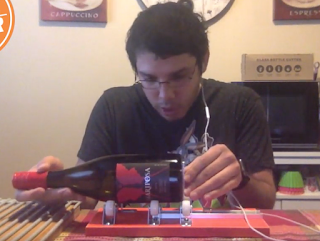 We’ll start off by placing the bottle onto the bottle cutter. You want to adjust the length and make sure it holds securely with the base.  So you want to adjust the glass bottle cutter backstop till you know get the height you want. So the more forward you go it’s going to make the vase shorter. So after it is set you tighten that up.
Also I should mention beforehand you should be having water boiling and also ice-cold water because after you score the bottle, you’re going to want to dip it into some boiling hot water and then from there you want to dip it into the ice-cold water and it’s going to separate the bottle.
Put on the safety gloves before you start cutting the bottle. It is better to wear them so that you don’t cut your hands. They’re cut resistant I guess you could say.
When you start scoring the glass bottle you want to put a little bit of pressure, about a medium amount of pressure, and you want to just roll it towards you, gently, just so it’s one even line.  You’re only going to go one rotation. One revolution. And here we go.
You will actually hear the glass score. 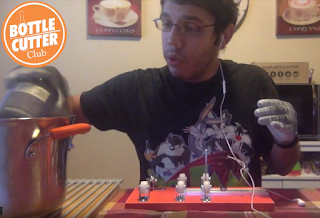 There we go.  Now I will get my hot water and my cold water. Now I’ve got my, hot boiled water here and I’ve got my ice-cold water ready. What you want to do is pick the glass bottle up and dip it in the hot water. It’s in there. It’s going.  Leave it in there for a few seconds and let’s get it into the ice-cold water here.  Flip it over.
And there you go.  Pops right off. 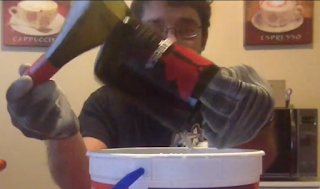 And like I said before, remember you just want to go one revolution around, the bottle, so you get one clean score and now you just sand the glass bottle down with your paper here.  So you don’t cut your hands, for one. Look at that. Beautiful straight cut. Love it. 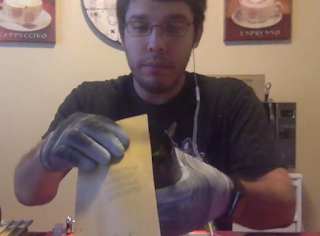 After you finish sanding the bottle you want to fill in some marbles and put some flowers up and you’ve got yourself a nice little flower vase.
Hope you enjoyed this blog post.  Thank you so much for joining us and reading this to the end.  In case you want a glass bottle cutter click here.
And please, post in the comments and let me know about your project and how they turned out.  I will try to answer any questions.
Don’t forget to subscribe to our YouTube channel and join our bottle cutter club Facebook group to see all the latest projects and tutorials we post.

For all you crafters out there, take care.
Until next time, bye. 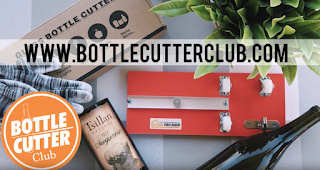 Hey everyone, Mathew here again, and this is the Bottle Cutter Club Blog by Home Pro Shop. We’re going to use the Home Pro Shop ... 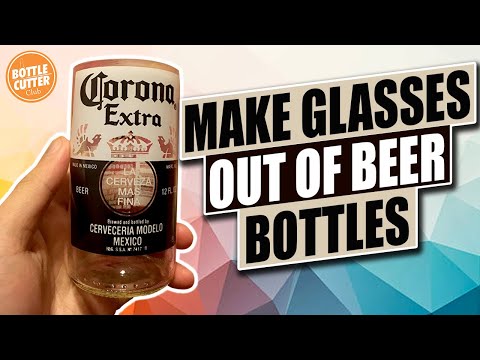